On Saturday 25 March, the Federalists marchedin Rome to affirm their attachment to Europe, which remains under the threat of a dislocation orchestrated by our political opponents.

Of course, this demonstration was not going to solve the many problems facing the EU: posted workers, economic recovery, borders, defence or the level of public debt.

But thousands of European citizens, asserting – like a majority of public opinion – their attachment to Europe was a strong signal to those who would like to give birth to a Europe that remains the only protective bulwark against unbridled globalisation and a worrying international context.

This march, which celebrated the 60th anniversary of the Treaty of Rome, was a great success. Nearly 10,000 people took part in this procession, which started from the Piazza della Bocca de la Verità and ended up in front of the Colosseum and the Arch of Constantine.

Groups of citizens from all over Europe marched hand in hand, carrying the European blue flag and the green federalist flag. With regard to the official delegations, many Italian cities were represented, as well as the European Parliament, the Italian National Parliaments and European political parties, including the European Federalist Party.

The day before, PFE members and its President Yves Gernigon attended the Civil Society Forum at the University of La Sapienza.

A wonderful European and fraternal event

In echoes to this march of Rome many European citizens also marched to Aalborg, Berlin, Brussels, Düsseldorf, Edinburgh, Madrid, Warsaw, Paris and Vilnius. In London, tens of thousands of people gathered to oppose Brexit.

Many thanks to the Movimento Federalista Europeo and to all those who organized this wonderful and very fraternal event. 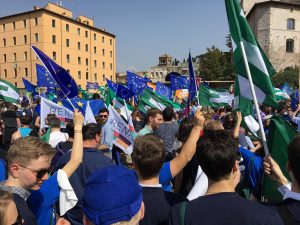 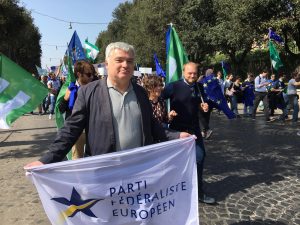 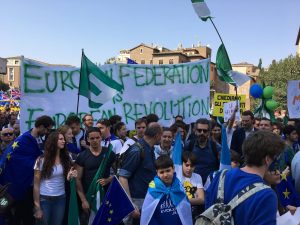